Note: This post applies to Angular. The 2+ version of Angular.

Welcome to the series on Getting Started with Angular. Angular 2 was released in September 2016 and and so far I have been enjoying working with it. I have been using the TypeScript version of Angular 2. It is has been pretty easy for me so far to pick it up but there have been a few things that have made me scratch me head. In this series I am going to walk you through creating a simple Angular 2 project that has a header/footer, routing to components/modules, show how to add new components/services, create multiple modules, lock down routes, changing UI configurations based on the environment parameter and adding in the Bootstrap library. When you are done with the series, you will have a good structure for any project that you want to start.

In this post we will get everything setup on your machine to do Angular development and then you will create your Angular project that the rest of the series will build on. We will be using the new Angular CLI to generate the project and several of the features such as components, services, modules, and pipes.

The Angular CLI is a node based utility which means that we need to first install Node before we can install the npm package angular-cli. The minimum version of Node that is required for the the Angular CLI requires is Node 4.x but I would suggest installing the latest LTS version from https://nodejs.org which at the time of this writing is 6.9.1. To verify the version of node that you have installed, launch a command prompt and run node -v. If you need to install Node, download the LTS installer from https://nodejs.org and accept any prompts that the installer has.

After you have Node installed, we need to globally install the Angular CLI by running (it will take several minutes):

On Linux and Mac, you may need to run the command with sudo.

If it says that ng is unknown, close the command prompt, re-open it and run ng –version again. If you are still having issues, leave a comment below and I will try to help you out.

After the Angular CLI is installed you can create a new project with the ng new command.

The ng new command does several things for you:

You can view the full documentation for the Angular CLI at https://github.com/angular/angular-cli

Now that we have our project generated, we can view it in a web browser by running ng serve to build it and start up a web server with live reload. Once ng serve has completed, open a web browser and navigate to http://localhost:4200/. You should be looking a page that says:

If you look at the project directory and file layout there are some key pieces of the project that I have highlighted below. 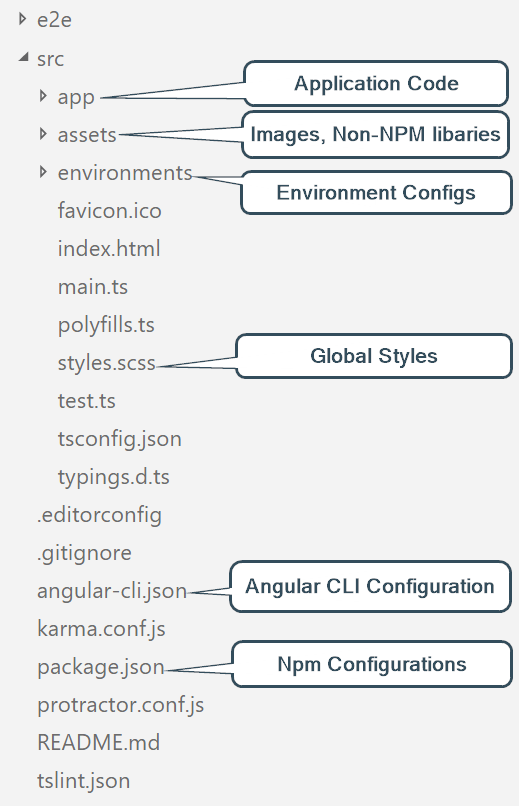 At this point you have your Angular 2 project created and are ready to start coding. In the next post, we will add bootstrap for our styling.